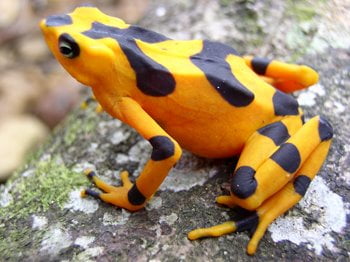 El Valley de Anton is a small mountain town nested in a dormant volcano crater about 2 hours from Panama City. El Valle is home to the Nispero Zoo and the rare golden frog as well as many other attractions.

El Nispero Zoo is located on the outskirts of El Valle in the shadows of Cerro Gaital National Monument. The zoo is home to 55 species of birds, both exotic imports from Asia and Africa such as golden pheasants and white peacocks, as well as a few tropical species not seen in any zoo outside Panama. Panama is home to many endemic species including the golden frog, a white-faced capuchin, spider monkey, an ocelot and trigillo margay, who can all be found here in El Valle at the zoo.  A pair of tapirs rescued from Manuel Noriega’s home after the invasion also found refuge in this zoo. El Nispero’s 7 acre property has shade trees and a botanical garden perfect for relaxing in the heat of the afternoon.

The Golden Frog, actually a toad, is a critically endangered species endemic to Panama. The golden frog, like many other frogs and toads, secreats posion as a natural defence mecachinism and in the wild it can grow as large as 15 g. The gold frog has been techincally extint in the wild since 2007. El Nispero is home to the brand-new Centro de Conservación de Anfibios de El Valle (EVACC), an amphibian study center sponsored by the Houston, San Antonio, and San Diego zoos. The center is busy studying the bacteria that is wiping out the golden frog and working hard to ensure a future for this species as well as others. The new amphibian exibit in the zoo is a much anticipated and welcomed a addition.

For an oppertunity to see a golden frog and many othe types of tropical wildlife hop on a El Valle Explorer Tour and check it out.

Please note that your tour reservation is not guaranteed until at least a 50% deposit is given. Once payment is received your tour confirmation will be emailed to you. Immediate payment is not required at the time of completing the tour booking form. After receiving your reservation request a representative will contact you to confirm you tour selection, availability, schedule a pickup time and review any special considerations, as well as provide payment details. If you have any questions please contact us